by Kris Holt
in Technology News

After beta testing the second major PlayStation 5 firmware update over the past few weeks, Sony is ready to roll it out to everyone, along with new versions of the PS4 system software and the PlayStation mobile apps. The PS5 patch is the big one since, 10 months after Sony released the console, the company is finally unlocking the internal storage expansion slot for everyone.

Although you can store games on an external hard drive, you can’t run PS5 titles from USB storage. Those drives are just too slow for PS5 games. Plug in a compatible M.2 solid state drive, though, and you can use it just like the system’s internal storage for PS5 games, PS4 titles and media apps. You can move games and apps between the internal storage and M.2 SSD as you wish.

However, it’s important to note that not any M.2 drive will do. You’ll either need one with a built-in cooling structure or to add your own heatsink. Sony has several other requirements. We’ve put together a guide detailing the best SSDs you can buy for your PS5.

The update adds some other handy features, including 3D audio support for built-in TV speakers, which you can activate through the sound menu. You’ll be able to use the DualSense controller’s microphone to measure the acoustics and help decide the best setting for your space. There will be equalizer settings for the Pulse 3D Wireless Headset too.

Some key user interface changes are on the way as part of tomorrow’s update too. It should be easier to tell whether a game you have installed is the PS4 or PS5 version. Each will be listed separately in the Installed tab on the Home screen and in the Game Library.

You’ll have additional customization options for the Control Center, including more choice over which controls to include in the bar at the bottom of your screen. You can move those around, so you can place the power menu on the left, if you like. You’ll also be able to see and send messages to friends and parties from the Control Center’s Game Base section.

On the accessibility front, there are new screen reader shortcuts. Press the PlayStation and triangle buttons to turn the feature on or off, and press the PS and R1 buttons to have the tool repeat the last thing it said. PlayStation Now members can select a resolution of 720p or 1080p depending on the game, and there’s a tool to test your connection and hopefully help you resolve any issues.

The console will also be able to automatically record clips of your “personal best” moments, such as hitting a better time or score when you compete in challenges. You can access those clips from the Media Gallery or the challenge card in the Control Center. In addition, there’s a new trophy tracker that lets you view progress on up to five trophies per game in the Control Center. 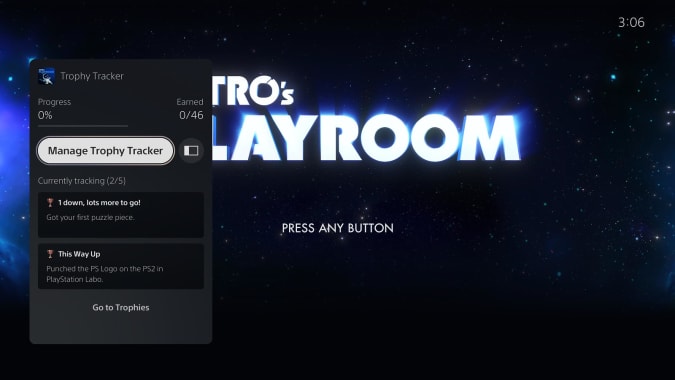 That’s not all, though, as Sony will release a PS4 update tomorrow. You’ll be able to see your PS5 trophies (as well as others’ PS5 accolades) on PS4. On both consoles, you’ll be able to disband a Party without removing people individually if you’re the Party owner.

On top of that, there are updates coming to the PlayStation mobile apps. Starting tomorrow, you’ll at last be able to stream PS4 and PS5 games to your iOS or Android device over mobile networks, a feature that definitely would have come in handy for visits to the park during the summer. You can adjust video quality options to help manage your data.

Meanwhile, as of September 23rd, you’ll be able to watch your friends’ PS5 Share Screen broadcasts through the PS App. It may take up to a week for the feature to become available through the Android version of the app, as Sony is rolling it out gradually on that platform.

All products recommended by Engadget are selected by our editorial team, independent of our parent company. Some of our stories include affiliate links. If you buy something through one of these links, we may earn an affiliate commission.

How to check what graphics card you have

NXP Semiconductors doubles down on datacentre migration plan with AWS

Chairman of the Senate Committee on Energy and Natural Resources Joe Manchin (D-WV) speaks during a hearing on a budget...

How to check what graphics card you have

Every computer has a graphics processing unit (GPU), and what kind of GPU you have largely determines which applications and...

Jake Fuller, analyst at BTIG, reiterates coverage on WM Technology (MAPS) in the Technology sector with a Buy rating. TipRanks.com...

Roger Boyd, analyst at UBS, reiterates coverage on Zscaler (ZS) in the Technology sector with a Hold rating. TipRanks.com has...